Snapchat has a ton of amazing features; in fact, if one were to come up with a corny marketing tagline for it, it would be “an app for the Gen Z.” It functions much like an enchanted castle that magically barricades off visitors.

Brands entered this enchanted mystery of a castle that is currently locked as a result of DJ Khaled and other lesser celebrities’ popularity on Snapchat. With the introduction of numerous brand-friendly features like stories, snap streak, filters, etc., Snapchat entirely opened its doors. Now that businesses are aware of what Snapchat can do for them, there is no stopping the social media upstart.

However, there’s a lot of competition in the ephemeral market game. The disappearing content format was what made Snapchat a colossal hit. The problem is since Instagram copied that format, Snapchat’s hype died down.

Instagram’s 500 million Story users are far above Snapchat’s 265 million daily active users (Snapchat, 2021).  Since the latest figure released by Instagram is two years old, the gap has certainly widened even further in 2020 given the platform’s 186.3 million new users (eMarketer, 2020). 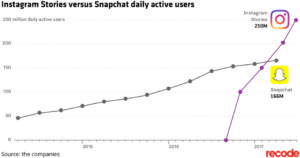 Nonetheless, here are some of the reasons why Snapchat is said to be the future of social media:

This is one of the biggest reasons why Snapchat seems to be the future of social media. Brands that are looking to share useless information and content have no chance of succeeding on Snapchat, you need to think disruptive and different to be accepted by today’s discerning audience.

When Snapchat and PepsiCo (for Gatorade) sat down to discuss how it could advertise on the platform, the former suggested creating a video filter that would let users share recordings that appeared as though someone had dumped a bucket of Gatorade on their head.

The videos were viewed more than 160 million times, and the head of new media marketing for Gatorade stated, “It was a terrific collaboration. We intend to collaborate more with Snapchat in the future year.”

Snapchat simply has two goals: to create a fantastic social app for younger audiences and to generate revenue in the process. Snapchat’s primary goals are to upend social media, start trends, understand the psyche of its users, and leverage that knowledge to develop branding strategies for popular companies. This could end up being a key factor in Snapchat beating out other social media networks and winning the race.

Snapchat users watch almost 8 billion videos daily, thus it is already eluding the dominant social media platform. Facebook has almost as many video views as YouTube, but the fact that Facebook has ten times as many users makes the overall conversion ratio extremely low. In terms of photo sharing, it is also competitive with Facebook.

According to a survey, the reason why more than one-third of college students use Snapchat is that it allows for creative interaction. The younger generation prefers to engage in creative activities as opposed to watching cat videos on YouTube. However, social media giants like Facebook and Twitter had failed to notice this trend and kudos to Spiegel for finding out about this generation and filling the gap.

Facebook and Twitter have made it very difficult to communicate in real life because it is easier to ‘like’ than to appreciate someone using a string of words. Snapchat has changed this completely. It allows you to send photos with messages (up to 35 characters) and emojis, so you feel like you had a real face-to-face conversation. 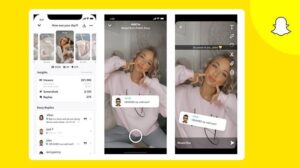 Snapchat rolled out different advertising features for businesses to cater to this huge demand for social selling. For example, they have the AR Lens, which allows brands to equip their snaps with animations and interactive triggers. This way, their ads are made more engaging and memorable. The “Cartoon Lens” has been such a big hit with users that it wound up generating a billion impressions three days after its launch (Snap Inc., 2021).

Another promising feature is the Snapchat Story Ads. Through this, brands can tap their consumers’ innate Fear of Missing Out (FOMO) and get them to click on the ads as soon as possible. Now we can say that Snapchat marketing trends are leaning towards the expansion of the platform as a space where businesses can thrive. In fact, the company has partnered with big brands like Ralph Lauren, the New York Times, and NYX Professional Makeup to launch AR advertising experiences targeted at their markets (Snap Inc., 2021), especially with the growing online shopping market due to COVID-19.

Overall, Snapchat’s notion to increase engagement and dialogues may simply be the reason why it becomes (or is it already) the future of social media, despite intellectuals’ and pessimists’ continued concerns about the demise of face-to-face communication and social behaviour.